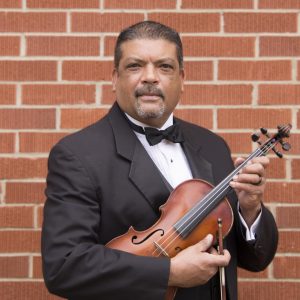 Guillermo Ayerbe is originally from Jersey City, NJ. He began studying violin at the age of three under his father, who had studied the violin himself at a young age. At the age of six he began studying with Rafael Wenke of the Ukranian Music Institute of America, New York branch. During his younger years Guillermo won various solo competitions in and around the New York area, performing at Carnegie Hall and Lincoln Center. He was brought to Fayetteville in 1991 after joining the military and was a paratrooper in the 82nd Airborne until 1995. After completing his commitment, he joined the Fayetteville Symphony in 1995 and became a concertmaster in 1997. Along with his classical music career, he also enjoys blending the sounds of his violin with rock, pop and other styles of music. Bill was inducted in the Fayetteville Music Hall of Fame in 2014.