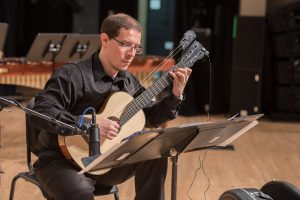 Carlos Castilla, has been featured as a soloist with orchestras and chamber ensembles, as well as in solo recitals in different cities of Latin-America and the United States. Carlos is the co-founder of Duo Guitiano, along with Cuban-American pianist Amanda Virelles. Duo Guitiano specializes in the repertoire originally written for the guitar-piano duo setting, from 19th century to the present day. In their path, they have rescued forgotten scores from the golden age of the guitar/piano duo, bringing back to life the tradition of this peculiar ensemble.

Dr. Castilla holds a Bachelor of music from Los Andes University at Bogotá-Colombia where he studied with Maestro Jaime Arias Obregón, and also holds a Master degree and a Doctorate in Guitar performance and pedagogy from the University of Southern Mississippi, studying with Dr. Nicholas Ciraldo.

Before coming to the United States, Carlos worked as a guitar professor at Universidad del Atlántico in his native Barranquilla, Colombia, where he also founded and directed the Philharmonic Society of Barranquilla (SOFIBA), institution that organized and promoted a vast array of cultural events in the community.

Carlos recordings of solo and duo repertoire are available on iTunes, Amazon and Cdbaby.