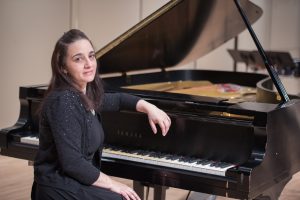 Amanda Virelles is known as a versatile musician, who has played for audiences around the world. Her performances have been described as sensible, profound, and energetic. She has performed as a soloist as well as collaborative artist throughout the United States, Europe, South America and the Caribbean.
Amanda began her piano studies in Cuba an early age, participating with success in festivals and competitions. In 1987 she was awarded a scholarship to study in Russia. She received her Master of Fine Arts Degree from the Russian Academy of Music “Gnessins” in Moscow, Russia, under the guidance of Inna Malinina. Virelles also holds a Master Degree and a Doctoral Degree in Piano Performance and Pedagogy from the University of Southern Mississippi. While at USM, Amanda was a student of Dr. Lois Leventhal. She has appeared as a soloist with several orchestras in Europe and South America under the direction of renowned conductors such as Yoshikatsu Fukumura, Mikhail Shervakov, Dmitir Manolov,
Fillipo Zigante, Kimbo Ishii – Eto, and Miguel Harth-Bedoya. Most recently she has performed under conductors Jay Dean, Raul Munguia and Alejandro Drago.
As a pedagogue Dr. Virelles has served as an Associate Professor of Music at Universidad del Atlántico in Colombia and the Conservatorio Nacional in Lima, Peru. Since her arrival to the United States, she has also served at Lane College, Vanderbilt University’s Blair School of Music, and Belmont University. She is a founder of the Philharmonic Society of Barranquilla, Colombia, member, MTNA,
FPTA. In collaboration with Colombian-American guitarist Carlos Castilla she formed Duo Guitiano, performing nationally and internationally. Virelles solo and duo recordings are available on iTunes, Amazon, and CDBaby. Currently, Dr. Virelles is an Assistant Professor of Music at Fayetteville State University, in North Carolina.