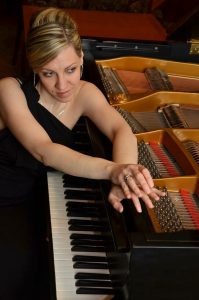 Anastasia is from Voronezh, Russia where she taught at the Voronezh State Academy of Arts as a private and academy teacher for all proficiency levels and taught chamber classes for middle and elementary school. During this time she also worked as an accompanist for all string classes, and woodwind instruments. In this position Anastasia also prepared the academy choir for domestic and international competitions held in Russia, Italy, and France. Between Sept 2003 and June 2008 Anastasia was invited to and performed live with the Voronezh State Philharmonic Orchestra on several occasions with numerous solo performances. Her international experience as an instructor and performer includes working in the countries of Kuwait and United Arab of Emirates between 2007 to 2011 where she coordinated, managed and performed in special music events with the cooperation of local sponsors and businesses as well as worked as a private instructor. Upon her arrival to the United States Anastasia worked in New Jersey as a private instructor and accompanist for Montclair State University, lead pianist and organist for several Churches and Van Hoven Music Studio. Since her arrival in NC she has performed as an accompanist in several recitals. Anastasia is also a member of the Fayetteville Piano Teacher Association.